The books I read during English...
1 BOOKS

Tris's life might be getting better initiation  wise but with her relationships it's going down hill.  It all starts out when Eric her main instructor shows a ranking list of round two of initiation.  When she scans over the list she sees that her name is number one and she knows that the other initiates are going to get jealous. Many of the others are, in fact, mad because how is a Stiff number one when abnegation is the exact opposite of dauntless. Then one night when she goes to get a sip of water and someone puts a blind fold on her and ties her hand together. Tris had know idea what was going on but hears water rushing this could only be one place the pit. She tries to get away and all of a sudden Four comes out of no where and beats the life out of all of Tris's attackers. When Four helps her he tells that she need to acted vulnerable but who knows if she is actually going to take his advice.

Chapter 18 marks a escalation in the story. Tris is now entering round two of initiation and round two is all about mental strength. What they do in Dauntless is put all of the initiates in a simulation that produces the initiates worst fear.  When Tris goes in the simulation for the first time she is in the middle of a field and crows start to attack her. All she does is try to stay calm and then she wakes up. In chapter 19 she goes in a simulation a second time where she is in a glass rectangle where water is rising in side and she miraculously breaks the glass.  When she wakes up Four asks her how she broke the glass and he confronts her about being divergent. Tris is trying to find out what a divergent is and how Four knows. So she goes to ask for help from Tori the woman that work at the tattoo parlor.  Tori tells Tris that Four knows because in the simulation the first time she just stopped it and the second time she manipulated the simulation.

Tris has just passed round one of initiation. She is in sixth place with other initiates  but during round two that could all change when the dauntless-born  initiates get put in the mix. While see gets a couple of days off from training see gets a head start in the second round by making friends with some dauntless-born initiates. She gets invited by Urria to go to a unknown location in the city but she suspects it will be suicide mission.  When Tris finally finds out where she is going it is the tallest building south of the bridge with 100 floors. They all get to the top of the building where they all go zip lining to the ground.  When they get to the bottom they each have to unstrap themselves from their restraints and rely on others to catch them.  This mission means a lot to the Dauntless showing they can trust others, trust in them self, and being brave.

Divergent is a fantastic book! This book is full of action every page you turn and keeps you reading.  Beatris is the main character and she has to choose on ceremony day which faction she is going to be in but there is a problem because she has inconclusive results from a test that would basically choose what faction they would go into. She eventually chooses Dauntless the brave faction. When she gets to the new faction she has to go through a process of getting in the first round she has to fight other people but she isn't very good as she gets 6 place in the end. During all of this abnegation the selfless faction is not getting along with erodit the smart faction and erodite is trying to take control of all the factions but with war instead of peace. 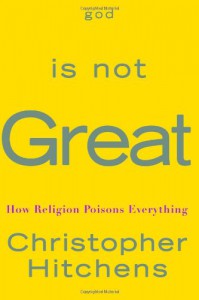 How does Religion end? To me this question is kind of irrelevant because to get rid of it we as society would have to face up to the problems we have.  Religion is some thing that people use as a tool to over come there difficulties in life, like death. Religion is therapeutic so people can get answers to a problem that has no answers. The only way I could see religion ending is if people over came fear itself. But fear controls us and fear makes smart people do stupid things.

The old testament has some insteresting things that are in it. More proof that the Bible is man made. I like how Hitchens goes about this and attacking the Ten commandments. He doesn't state the obvious about how the two tablets are missing and no where to be found may I add. But goes on to say how the first three commandments are just different variations of the same one.  Also Moses speaks in third person in Numbers 12:3 where it states, "the Lord spake unto Moses." Maybe Moses just had a case of Megamania and thought he was as high and mighty as God himself.

This book is taking longer to read than I would like.  It is mostly because I need to find more time to read this book besides just in school.  So far I really do enjoy reading it and it makes me think deeper about the effects of religion on man kind. One thing that I have recently read is that a Cambridge astronomer, a believer in creationism, tried to discredit the big bang actually proved that the big bang actually happened. To me this just proves that religion is a human made thing. This book is just full of wonderful things and I just need to read more!

The devils in the pig and health care is killed

The part that I'm at is about how the pig in some religions is considered to be very atrocious. Hitchens brings up very good points that the pig actually isn't that bad. First, he say that the pig shares a great deal of our DNA and that we can use their skin, heart and many other body parts for human transplants, saving many lives.  He also brings up that the pig is close to us in a way that a dog is.

In the next chapter he talks about how health care workers tried to eradicate polio through the vaccine. They had a huge problem with trying to stop it from spreading in mostly Islamic countries. This was because the religious leaders in the countries would tell their people that the vaccine would sicken their people even more and that it was used for Western countries to control their minds. This has also happened with the AIDS epidemic where religious figures would say that it is a sin to wear a condom and that the condom spreads AIDS not preventing it. This lead to even more of an out break in Brazil because an ex-cardinal preached those exact things to his congregation.

God is not Great.

This book is not for the religious person. Hitchens, one of my favorite authors, so far has set very good points on how religion poisons everything. His religion disbelief was not caused by a traumatising event. He goes into further detail how religion has slowed civilization's progress and how it is a major contributor to many wars. One of those wars is the one on terrorism and how a people with a deep religious view could kill thousands in the 9/11 attacks.